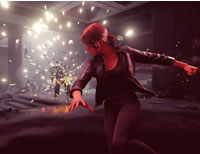 Can I Run Control Ultimate Edition

Can You Run It

Control is an action-adventure third-person shooter being developed by Remedy Entertainment and is set to release in 2019. Take hold of the Director's Pistol, a special firearm which can be transformed into different shapes. With your Director's Pistol in hand, it is now up to you, Jesse Faden, to eradicate the threat of the Hiss. More details, including system requirement information, will be updated as it is made ready.

Can I run Control on PC?

Nominated and winner of a ton of awards, the supernatural action-adventure game, Control, still has the PC gaming world buzzing about its awesomeness. Many PC gamers are still wondering if their computer can run Control and, if so, on what graphics settings. The game is built on Remedy’s Northlight Engine - the same engine that was used to make Quantum Break. In Control, you play as Jesse Faden who wields the Service Weapon which can be altered in a supernatural way to adapt to a number of situations. After the Oldest House is invaded by the hostile Hiss, it is up to Jesse and the other agents to fight back against the otherworldly enemies. The game plays out beautifully and has some amazing graphics so it makes sense that it has some fairly high system requirements to match it. If you want to be able to run Control on at least Low settings, then you will need a computer that passes the minimum system requirements test.

Control is one of those games that probably should only be played on the highest of settings, but that’s not always feasible for all computers, and it still deserves to be played by everyone. Passing the minimum system requirements by a hair basically means you’ll be able to run it, but with the graphics settings turned down a fair amount in order to maintain a solid frames per second. The specs needed to run Control are fairly similar to RAGE 2 so if you’ve played that already, you’re probably in good shape. Specifically, your rig will need at least a GeForce GTX 780 or a Radeon R9 280X for a video card. Additionally, it will also need a CPU that’s at least as powerful as an Intel Core i5-4690 or an AMD FX-4350. To top it all off, your PC should also have 8 GB of system RAM (or more). But as mentioned earlier, this is a game that has really impressive graphics and visuals, so you may want to be able to pass the recommended requirements as well.

The recommended requirements for Control are on par with a lot of other games that released in the last two years. In fact, its GPU requirement is the exact same as games like DAEMON X MACHINA and Mount and Blade 2: Bannerlord. Remedy states that your PC should have at least a GeForce GTX 1060 or a Radeon RX 580 if you want to max out the settings on Control. They even left a little note saying that the GeForce RTX 2060 will enable you to play with Ray Tracing on. For your CPU, you should have at least an Intel Core i5-7600K or an AMD Ryzen 5 1600X in order to pass the recommended CPU test. If you have hardware that’s at or above those levels, then the only thing left is having 16 GB of system RAM and you are on your way to playing one of the best games in the last few years, Control.